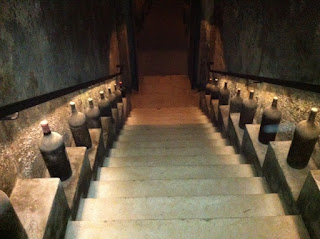 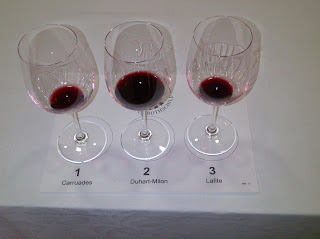 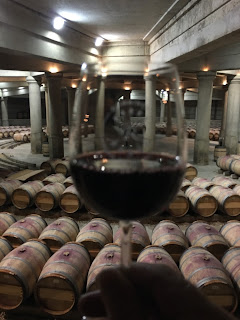 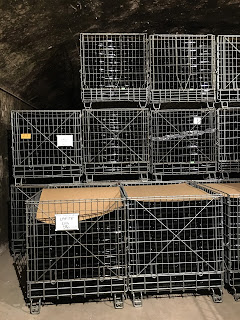 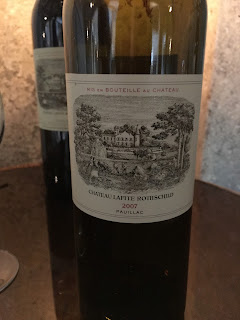 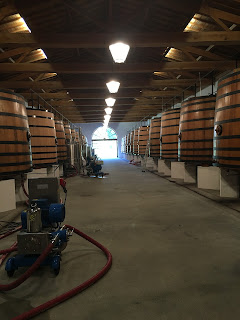 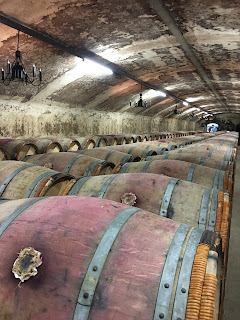 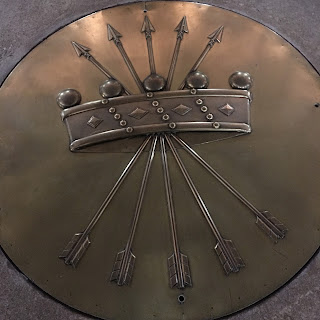 Posted by HamishWM at 17:44 No comments:


The original owner of the estate was Jean François de Pontet, who was Grand Ecuyer (Master of the Horse) for Louis XV at Versailles. Monsieur de Pontet became Governor of the Medoc and bought land near Pauillac in 1705 to plant vines. He expanded his vineyards by planting around the small hamlet of Canet and the Pontet Canet estate was established. This was common practise at the time to link your name to the place, eg Lynch Bages, Leoville Barton, Lafite Rothschild.
The estate flourished and the wines became very well known around the world. In fact they were so successful that they were included in the
1855 Classification of the wines of the Medoc. They were ranked 5th Growth, which was a prestigious honour. 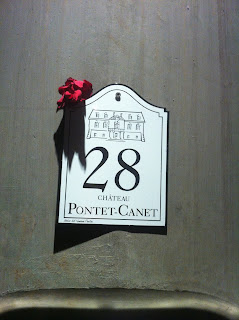 The Chateau was bought in 1865 (soon after the 1855 classification) by the Danish/German wine merchant Herman Cruse, who also had other famous estates such as Giscours, Rauzan Segla and d'Issan in the Margaux appellation.  Herman Cruse had made his money by speculating and cornering the Bordeaux market in 1847. The Cruse family invested heavily in the Pontet Canet wine estate. They built the underground cellars as well as the main courtyard area and at the end of the 19th Century the architect and estate manager Theopole Skawinski built the very modern vat room in 1895. Skawinski was also the estate manager at Chateau Leoville Lascases and he designed the historic cellars at Chateau Lynch Bages. In fact the Delon family, who run Leoville Lascases are direct descendants of Skawinski. The 'chai' design is very similar to Chateau Lynch Bages with an upper reception and sorting area and then a gravity fed vat system.


The Cruse family ran the estate up until the 1970s when they had a scandal. In 1973 they were found guilty of falsifying records in order to sell cheap table wine as more prestigious wine. They lost their reputation as merchants and they were forced to sell most of their estates.
In 1975 Guy Tesseron from the Tesseron Cognac house bought Chateau Pontet Canet. He ran the estate and then passed it on to two of his three children, Alfred and Gerard Tesseron. When Gerard Tesseron passed away, the stewardship of the Château became shared between Alfred Tesseron and Gerard's two daughters Melanie and Philippine.
So the Château has had three family owners over the last three hundred years. This is quite an achievement considering the peaks and troughs of financial stability as well as two World Wars.
Jean Michel Comme started working at the estate in 1989 and is now the Regisseur, looking after the vineyards and winemaking. Jean Michel is a deep thinking, innovative character who is passionate about his work. He has a small wine estate on the Right Bank, which he farms biodynamically. So, he convinced Alfred Tesseron to convert Château Pontet Canet to biodynamics in 2004. However there was a hiccup in 2007 when the pressure of mildew and disease in the vineyards required specific non organic spray treatments. This set back the biodynamic conversion, which was finally achieved in 2010.
The Château also introduced 3 horses to work on a trial basis over 8 hectares of vines in 2008, and this has now expanded to more horses and in fact now a complete stable development, so that 14 horses can operate over the whole estate.
Under Jean Michel Comme's stewardship and with the support of the Tesseron family the Château has significantly improved the quality of the wines.
I visited the estate last week and enjoyed a fascinating tasting of a few recent vintages with Jean Michel Comme:
2008.....Savoury, rich style with great purity of Cabernet fruit. Drinking well now, but will age for another 20 years no problem.
2011.....Slightly tight/closed at the moment, but with a core of dark fruit and good acidity. A balanced wine that definitely needs more time.
2012....a fascinating wine, as this was the first vintage with 35% of the production being aged in large (900 litre) concrete amphorae. There is a significant change on the tannin structure and the wine is more fruity. It still has a concentration but seems very different and may not age quite as much.
2013.....much lighter style of wine and very reflective of the difficult year. There is more Burgundy character and much lighter mouthfeel. A wine for short term drinking.
2015....(a barrel/tank sample). Incredible intense rich hearty style and voluptuous tannins and silky smooth. A magnificent wine that should be on a par with the great 2009.

Innovation and Pioneers.....
For a Grand Cru Classe Chateau of 81 hectares to transform the whole production to biodynamic principles of viticulture is very innovative. It might be easier to work in Burgundy on a very small scale with biodynamics, but they are the first Medoc estate to farm biodynamically.

To reduce the amount of oak ageing for their wine is also a dramatic change to everyone else in their near viscinity. The philosophy links to searching for a purity of fruit, rather than masking the wine with expensive new oak, as well as preserving the oak forests.

I love visiting Château Pontet Canet and they are certainly one of the star estates in Bordeaux. They are not afraid to experiment with different practises like using horses or ageing their wine differently. I am sure that Jean Francois de Pontet would thoroughly approve of re introducing horses to the wine estate. Some of their neighbours in Pauillac have been slightly suspicious, but the truth is surely in tasting these great wines. I have personally bought several vintages of Pontet Canet for my cellar and will continue to follow their innovations.

Posted by HamishWM at 10:22 No comments:

The grape harvest is in full flow at the moment here in Bordeaux.
It is always an exciting, busy and quite nerve racking time for everyone involved in grape growing and wine production. The fruits of a year's work will soon be established. It will be a great relief as 2016 has not been the easiest growing season in France. There has been hail in parts of the Languedoc (near Montpellier) recently and Burgundy seems to have had all sorts of frost and hail in May....which is very late, which has severely effected the quantity and quality of grapes.
But Bordeaux is currently enjoying some lovely weather. We had a wet and damp April, May and early June and then a decent warm Summer. And early Autumn has been very warm with consistent high temperatures.


The only negative for Bordeaux during the Summer has been the lack of water.....grape growers are never happy! But this Summer has been very dry, which has effected the foliage and photosynthesis on some of the younger vines. The older vines with more established roots on gravel soils seem to have flourished far better, as well as the older vines on the cooler limestone soils around Saint Emilion. Most of the merlot grapes have been picked already in the Medoc and the grapes seem quite small with thick skins. Perhaps a tannic concentrated wine for 2016.
The Cabernet Sauvignon and Cabernet Franc grapes are now being picked over the next two weeks. It is a delightful time to visit the Chateaux and smell the juice and see so much activity taking place. Bella Wine Tours continues to run some great tours throughout the year.

Posted by HamishWM at 15:49 No comments:

White Wine in the Medoc?

Great to see some innovations and experiments at Chateau du Tertre. They have planted some Chardonnay, Gros Manseng, Viognier and Sauvignon Blanc to create their 'Tertre Blanc ' wine. Apart from Sauvignon Blanc these grape varieties are not permitted in the Bordeaux appellation to make Bordeaux Blanc. Therefore this white wine is declassified to 'Vin de France'.
They are also experimenting with large Austrian oak barrels, which is different from 99% of other top Chateaux, who use Allier or Troncais French oak. The only other Chateaux that I know who use a small amount of Austrian oak are Palmer (in Margaux) and Clinet (in Pomerol).
Tertre Blanc was first made in 2014 in small quantities (500 cases). It looks like 2016 could be a larger crop, but it will still be a small amount compared to the main emphasis at Chateau du Tertre on the red wines.
In the Medoc there are some interesting whites wines being produced, but they don't seem to be in the same quality league as Pessac Leognan. The major Chateaux that make white wines in the Medoc are: Palmer, Prieure Lichine, Talbot, Lynch Bages, Mouton Rothschild, Cos d'Estournel, Lagrange and Margaux.

Chateau du Tertre is certainly a wine estate to follow in the Margaux appellation for their improving quality. The Chateau was bought by Eric Albada Jelgersma in 1997 (he also owns nearby Giscours as well as Caiarossa in Tuscany). The talented Alexander van Beek looks after all Mr Albada Jelgersma's vineyards and since Frederique Ardouin arrived from Chateau Latour in 2008, the estate has been introducing biodynamic vineyard practises. The estate is also undergoing a re planting process to increase the density of vine plantings and to reduce the amount of Cabernet Franc on the vineyard.
The vines are planted over two main hills (Le Tertre means a 'hill' or 'mound') and the estate sits at the highest point of the Margaux appellation. The estate is ranked a 5th Growth from the classification of 1855, and interestingly it is the same size in 2016 as it was in 1855. There are very few estates that are the same size apart from Grand Puy Lacoste in Pauillac.
I recently tasted a magnificent 2005 Chateau du Tertre at the Chateau. It was perfectly 'in the zone' for tasting and drinking. Beautiful bright, balanced dark blackcurrant fruit style, with evident (but not too overbearing) acidity and tannin. A wine to enjoy now and over the next 10-15 years.
This wine retails for approximately £60 or $75 or €70.

Posted by HamishWM at 13:48 No comments: